What is Fog Computing?
Fog Computing helps extend the cloud by bringing it closer to the things (the edge devices) that actually produce IoT data in the first place and also act on it. Fog nodes, which sit between the cloud and smart device (thing), can be deployed anywhere with a network connection close to the smart device where actual data generation or end outcome takes place. Example of this can be factory floor, on top of a power pole, alongside a railway track, in a vehicle, or on an oil rig. A Fog nodes can be any device with computing ability, storage capacity and and network connectivity can be a fog node. Examples include industrial controllers, switches, routers, embedded servers, and video surveillance cameras.

Why Fog Computing Now?
IoT devices generate data constantly and in gigantic volumes. Often analysis must be very rapid. Some IoT use cases are as follows
In the time it takes user data to travel from the edge to the cloud for analysis, specially during network latencies or breakdowns, catastrophic events may result. Handling the volume, variety, and velocity of IoT data in such cases requires a new computing model. Fog Computing offers a solution with following benefits.

However, it does not mean cloud layer is not required. It has its own role in running deeper analysis and creating insightful and actionable real time analytics and control application rules for Fog nodes to function in real time. To set everything in perspective], here is a summary of what role each computing layer plays in overall IoT ecosystem. 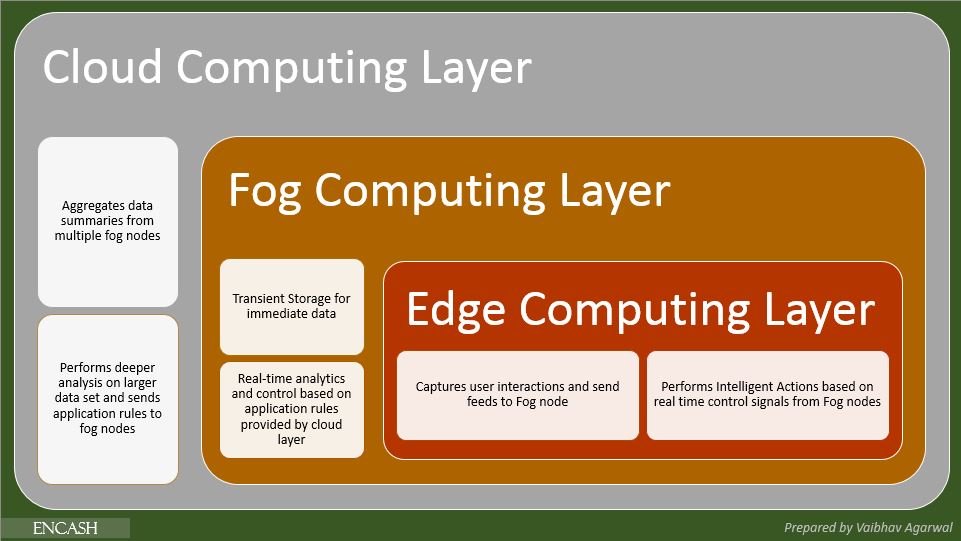 [Note: The post is based on information and notes from the Cisco whitepaper: Fog Computing and the Internet of Things: Extend the Cloud to Where the Things Are]
Labels: internet-of-things technology