While app users / downloads is key to app's success, monetization is critical to the business viability of the app development effort. Infact, your monetization strategy holds the potential to drive app's revenue growth higher than the app's user growth itself. A retrospective view of 2015 app user growth and revenue growths tell a similar story.

So here are some key app monetization models you can consider for improving the revenues from your apps. 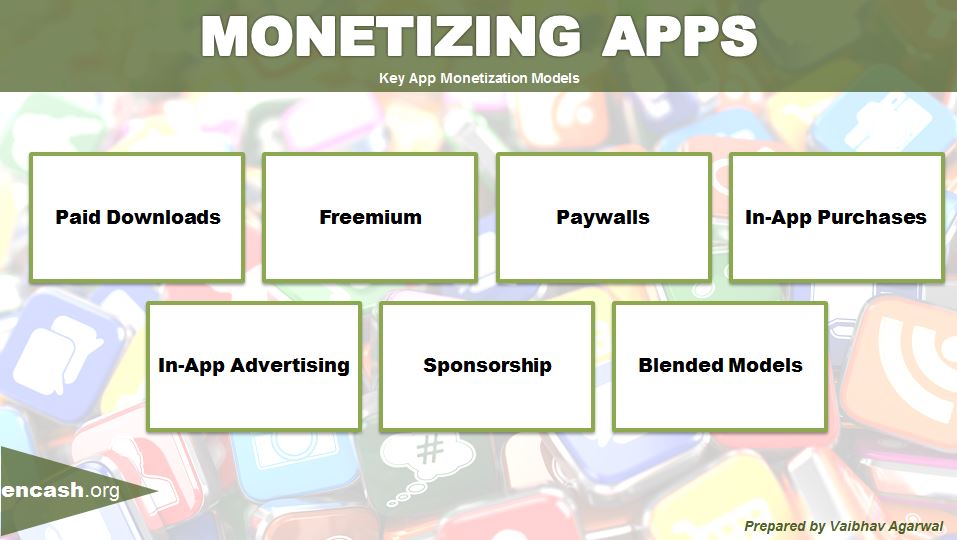 App Monetization with Paid App Downloads
Paid app downloads generate money by charging users a one-time fee to download an app. This means your app is not free to download and if people want to use your app, they must first purchase it from the app store. This is usually used for apps such as games or utilities that offer a unique service like photo editing or file hosting. Success with this kind of an app monetization model also depends on your ability to showcase the perceived value of your app with high app listing (which includes screenshots, five star reviews, etc.) that differentiates it from similar free apps. Put another way, the most profitable paid apps do a great job of selling their app's unique features, be it design or functionality or brand.

Freemium App Monetization model
Because users are more likely to download apps if they are free, developers often use a “freemium” model that lets users download an app at no cost, then offer paid upgrades to “premium” versions with more features. This might be a one-time fee or paid for on a subscription-basis. Freemium App monetization model thrives on gated app features. People have access to an app's basic functionality, but there is a charge for premium or proprietary features. The premise of this model is that you attract people to your app and give them a rich preview of what your app can do (without giving them everything). The goal is to accumulate and engage app users until they are willing to pay for additional in-app tools.

App Monetization with Paywalls
The paywall app monetization model is similar to the freemium model except that it focuses on gating content, not features. Paywalls allow an app user to view a predetermined amount of content for free and then prompts them to sign up for a paid subscription to get more. This model is best suited for service focused apps and allows brands to earn revenue on a recurring basis. An example of an app that utilizes this app business model is Umano, which transforms news stories into podcasts. Umano allows users to listen to a limited number of stories until they sign up for a premium subscription. With this strategy, people get to use all of Umano’s best features, but for a fixed amount of time until they are engaged enough to pay for unlimited use and content.

App Monetization with In-app purchases
Another monetization strategy is selling goods and services directly through in-app purchases. This could include peer-to-peer selling, or selling a completely virtual product like extra lives in a game or special features in an app. You could also charge users for specific services like live feed data for news or access to a catalog of media. Additionally, you could sell real-world goods through your app using a traditional ecommerce store.

App Monetization with In-app advertising
Similar to websites, you can also generate revenue by using display ads inside your app. The most common type of in-app ads are banner ads, which overlay your app in a designated screen area. These could be your own house ads advertising more of your apps, or ads from other businesses that earn you revenue every time a user clicks on them or installs the app. You could also use interstitial ads, which appear as full-screen pop-ups at the entry or exit points of your app, or between levels. Interstitial ads can be visually striking, incorporating images, videos, and links to other websites. But these may disrupt the app experience more than regular banner ads. In this monetization model, you remove the cost-barrier to purchasing your app and allow free downloads. Your goal is to accumulate a sizeable user base and gather information on the people interacting with your app. Then, this data gets sorted and sold to app publishers who pay you to place targeted ads in your app. One of the best example of an app monetized with In-app advertising is Facebook. Facebook users don’t directly pay Facebook anything to download or use their mobile platform, but Facebook leverages a vast amount of their data to sell highly targeted ads.


App monetization with Sponsorship
Sponsorship model entails partnering with advertisers, who provide your users with rewards for completing certain in-app actions. In this app monetization model, brands and agencies pay to be part of an incentive system. Your app earns money by taking a share of the revenue from redeemed rewards. This way, you can incorporate advertising into your app that actually enhances your app’s ability to engage users. An early adopter of this app business model is RunKeeper. RunKeeper uses incentivized advertising to motivate its users to track their running activity with their app to unlock exclusive rewards and promotions. This strategy lets RunKeeper monetize their app without disrupting their app’s experience with banner ads.

The Blended App Monetization Models
As the app landscape becomes more sophisticated, we should expect to see a trend towards more blended models. For instance, you can start with a “free, but with ads” model and then offer users a paid upgrade to an ad-free version, which is a “freemium” approach.

Some recent trends in app monetization


According to a Mobile Advertising and Monetization 2013 - 2018 report by App Annie and IDC, the continued innovation in mobile apps, monetization models and mobile advertising have driven significant growth in freemium and in-app advertising revenues. Here are some key highlights:
References:
http://www.idc.com/getdoc.jsp?containerId=prUS25528015
http://blog.appannie.com/app-annie-2015-retrospective/
http://info.localytics.com/blog/app-monetization-6-bankable-business-models-that-help-mobile-apps-make-money
Labels: technology